Vuk Stefanović Karadžić was born in 1787 in the village of Tršić. He was a philologist, reformer of the Serbian language, collector of folk literature, and writer of the first dictionary of the Serbian language. His monument and bust were erected in Loznica. Primary schools in Loznica and Tršić, and one street and a square bear his name. Vuk’s daughter Vilhelmina Mina Karadžić was a painter and writer. In Vuk’s Culture Center there is a gallery named after her.

VUK’S ASSEMBLY is the oldest and most visited cultural manifestation in Serbia. It is devoted to cultivating the memory of his life and work. Traditionally, the central program of the event takes place in September, on Sunday before the Nativity of the Virgin Mary, in Tršić. One part of the program is realized elsewhere: in Loznica, Belgrade, and near Tronoša monastery where Vuk was educated for a period. Pupils Vuk’s assembly takes place in May. 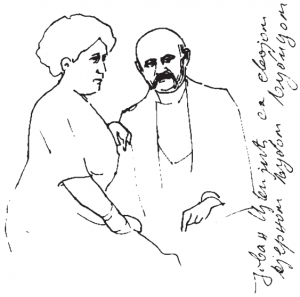 Jovan Cvijić was born in 1865 in Loznica. He was a scientist, the primary instigator of the Serbian Geographic Association, and the founding father of Serbian geography. Thanks to his geographical work he held an eminent position among European scientists. He spent his whole life recearching Balkan Penninsula, its settlements and local population’s origins along with their ethnic and social characteristics. The manifestation “Cvijić’s days” dedicated to this great person takes place in October.

Miodrag Mića Popović was born in 1923 in Loznica. He was an academician, painter, art critic, writer, and a film director. Mića Popović and Vera Božičković Popović’s permanent exhibition of paintings was opened in 1989 at the same when he was declared to be the first honorary citizen of our city. The “Mića and Vera’s Days” manifestation is organized every year in June.